After almost a year of not using Ubuntu, I tried out Ubuntu 11.10, codenamed Oneiric Ocelot (what’s up with the harder-to-spell names?). Since this was a trial run, to see how things had changed, I decided to install Ubuntu from within Windows, using the Wubi (Windows based Ubuntu) installer.

Wubi installs Ubuntu in a folder on your existing Windows partition, and can be uninstalled any time by hitting uninstall on your Windows programs list. It is an easy and intuitive way to try (and even stick with) Ubuntu for beginners.

I have been an on-and-off user of Ubuntu since version 6 (still have my Edgy discs somewhere!), and installing Ubuntu by partitioning discs, the ‘normal’ way is not hard. However, the reason I chose to go with Wubi was to test all the hardware – previous versions did not play with my laptop hardware too well. Sadly, the situation is not much improved even now.

Instead of burning a disc, I mounted the Ubuntu .iso file on MagicDisc (read how to mount any .iso disc images without burning a disc), and proceeded to install it from there. That is when this error popped up:

As is usual when I hit a tech issue, I searched online for possible solutions. The most common answer was that the .iso file is corrupt. This can be seen in the error logs too (see my log screenshot below). 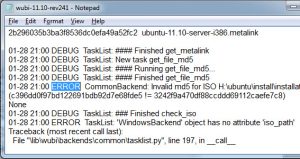 The log file is located at C:\Users\sumesh\AppData\Local\Temp\wubi-11.10-rev241 – that last word can change. In that file was the following error, showing an invalid md5 hash, which indicated a less-than-perfect iso file:

It seems that the file was fine, and the error was caused by mounting the disc image file in a virtual drive.