Messaging app Hike has launched a useful feature called Rewards. It provides talktime in return for inviting your friends on Hike. Hike is available on all major platforms – iOS, Android, Windows Phone, Symbian and Blackberry.

Do not worry, this is not one of those “Visit this link for free talktime” scams you often find on Facebook. However, this Rewards feature is rather complicated to implement across all networks, and there might be technical issues. One of my friends was unable to redeem the talktime reward, while another got the talktime but the app was stuck at the redeem page. 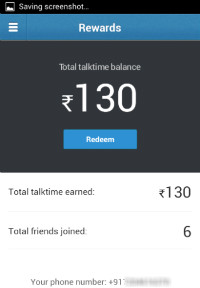 Hike also has a free Hike-to-messages feature, where you can message your friends without Hike, and it will be delivered as messages. When the user replies to that message, it lands in your Hike app. Until Rewards launched, Hike provided 50 extra SMS a month for each new invited user (everyone starts with 100 SMS a month).

Hike is one of a growing number of smartphone messaging apps, in an area dominated by Whatsapp messenger. Whatsapp is the most popular of the lot, but it also misses a some key features, which are found on these new alternatives. Unfortunately, the network effect seems to be in play and growth has been rather slow for most of the other apps. I experienced it when trying to invite my friends over to Hike.

Here are some key features of Hike that is missing on Whatsapp, which may prompt you to switch: group chat with unlimited members, Hike-to-SMS, encryption for security, and now Rewards. Entire websites like Whatsappsucks.com have been launched because the app created unencrypted traffic, until recently. Hike seems to be moving fast now, adding features like these to lure users away from Whatsapp. It has gone international too.

I have been interested in Hike because of these features, its beautiful UI, and the fact that it is made in India. The only concern is that it is made by telecom operators, so we may never see some features that might otherwise have been included – like voice chat, conferencing etc, each of which generate revenue for network operators, and which they will never want to sacrifice by providing the feature on Hike.

Update: Many have responded that the rewards page fails to load. I have asked the Hike team to look into it. I was unable to reproduce the issue, so if you have some problems claiming Hike rewards, let us know what phone, OS and connection you are using. One possible reason is a poor internet connection – unlike the rest of the app, the rewards page seems to be a web page that loads within the app, so try using it with a strong wifi or 3G connection.