Google Chrome is a web browser project by Google. It was leaked yesterday, and Google held a press conference to announce the launch of Chrome. With Chrome, Google hopes to bring the best of various browsers and code, like Firefox and WebKit (WebKit is used by Safari too).Google may well have been forced into a damage control mode, as the first bit of news that we knew was Chrome’s information being leaked. Furthermore, Linux and Mac versions have not been launched – that leaves a large number of Google fans displeased.

Chrome is smooth, well refined (as of limited usage I have done) and manages the migration process flawlessly by importing every bit of important data from IE or Firefox. The innovative placement of tab bar, lack of title bar (that’s right, no title bar for Chrome), omnibar (that is what Google calls Chrome’s search-cum-address bar) are all a fresh breath of life in an otherwise plain browser. Did I tell you Chrome follows Firefox shortcuts (mostly)?

I had upgraded to WordPress 2.6 today (late, I know), and clicking on the Turbo link did not prompt me for any annoying Gears installer – Gears is built into Chrome.

Currently, there are no extension capabilities to rival those offered by Firefox, and that is one reason why Firefox users will not hurry to Chrome full time. Notice that I say “full-time”, because Chrome makes a very compelling case as a casual browser – lack of extensions notwithstanding.If Google’s promises of fast Javascript rendering, security, extensions etc. is delivered, Opera, Firefox and several other browsers could have one very interesting competitor to deal with. None of the other browsers have the backing of a company as large as Google (Microsoft and Apple do not count, as one suffers from lack of quality and the other suffers from lack of quantity). Whether Chrome and Firefox would coexist in Google’s future plans also has to be seen.

API support is coming, says Google. APIs will enable developers to write extensions, though the effectiveness of future extensions will have to be seen to be believed. We do have the example of Opera widgets failing completely, now don’t we?

The installer file downloaded from Google Chrome website is only ~500 KB in size, but launching it downloads the actual Chrome installer (~7MB) from Google servers.

Importing settings is very straightforward, and reminds the import process of Firefox.
Starting up the browser gives you a page like this: 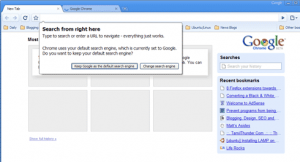 And here I am, writing about Google Chrome (this post) from within Chrome.