For the last two major versions of Mozilla Firefox on Windows 7, I have been getting a “Software Update Failed. The update could not be installed. Please make sure there are no other copies of Firefox running on your computer, and then restart Firefox to try again” error. Windows Vista users seem to have encountered the same Firefox update bug too.

When a major Firefox version was released, I hit About > Check for Updates and let the download finish. However, restarting Firefox did not update it to the newer version. Every time I restarted Firefox, I would get the above mentioned error stating that software update has failed. 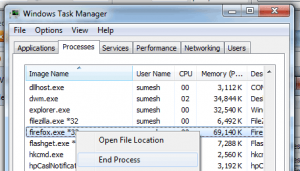 The error message tells you to ensure that Firefox is not running on your system (ie. quit it completely) and restart it for the upgrade. 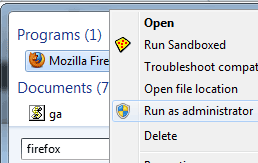 Follow these steps to get Firefox to update to a newer version that you downloaded already via “Check for Updates”:

If this does not work for you, download the latest Firefox exe file from Mozilla website and update it manually. There is also another hack to force an upgrade, that involves removing a few update-related files from various folders in the Firefox install directory, but it would be easier to just use one of the two above methods, so I am not listing it here. If you’re interested in the more complicated hack, let me know by comments and I’ll add it here.