Windows is probably the most vulnerable operating system around, but by using the right tools and proper judgement, at least some of the problems can be avoided. Here, we have a collection of the best free security tools available for Windows.

Most of these tools are known to uber-geeks, but by highlighting them here, we hope to spread the awareness among those who are less aware of the existence of these free tools. This is also an attempt to mitigate the common belief that good free tools do not exist, and those that do, are not as good as the paid software. Many of the software mentioned here have beaten paid software in third-party tests too, re-enforcing the fact that paid software doesn’t necessarily mean better software.

Note that this is not yet another of those huge lists of free tools, but rather a hand-picked selection of best free security tools that we have used for years now. Only the best two or three tools in each category, in terms of ease of use, performance and resource usage have been listed. Furthermore, most of these tools are free for home use only, and requires a paid license for commercial/enterprise usage.

Norton Antivirus is perhaps the most popular and publicized anti-virus software. This is thanks to the hundreds of millions of dollars that they have spent in advertising and marketing. However, independent tests have shown that Norton Antivirus is not the best software, and also that it slows down the computer start-up times and uses extremely high resources.

Avast is a free anti-virus, and a credible alternative to Norton Antivirus. It is free for home use, and requires the least system resources in terms of CPU and memory usage. The virus definition updates are usually very small in size (less than 1MB), which can be a boon for those with slower connections.

As regards its performance, it has often been found to be neck-and-neck with Norton AV, and in some cases, better than Norton AV (in tests performed by third-parties). Its default interface is quite tacky, but skins can be used (download from Avast Skins repository). My personal favourite is the Mac Lovers skin, but you may also want to look at aVist Vista theme for tight integration.

AVG Free is also a good anti-virus, but it uses more system resources (as compared to Avast) and updates are also larger.

Adware can slow down your computer and use network resources to pull in and display ads. They may also track your browsing habits to determine relevant ads (which is a cause of privacy concern).

Spyware can spy on your system and send all sorts of data to external servers chosen by the makers of the server. Possible data spying may include personal details (credit cards, passwords etc.).

Spybot S&D is a popular anti-spyware tool, and has been around for some time. Initially developed as a part-time project, it has grown to be a full-time project for its developer. The default interface is a bit drab, but can be spruced up with skins from the official skins repository. 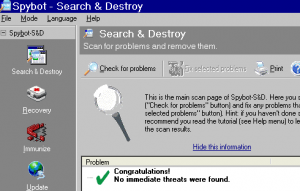 Ad-Aware (pictured below) is a reliable anti-adware tool free for home use. It works well in tandem with Spybot S&D, and they complement each other well. 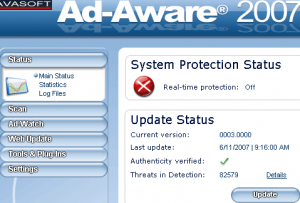 Spyware Blaster is also a good antispyware software, should you find that either of the above is insufficient.

The basic function of a firewall is to prevent undesired network activity, by preventing access to incoming or outgoing connections to unauthorized applications. This can reduce security risks greatly, as malware typically contacts an external server (which will be prevented by the firewall.

Comodo Pro Free is a well-known and recommended free firewall. Like most of the applications mentioned here, Comodo also has a ‘pro’fessional version, but upon closer inspection, one would realize that the free editions are adequate for normal use. 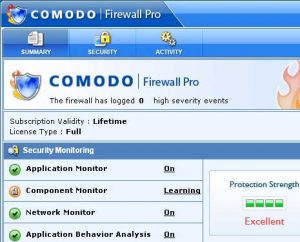 Zone Alarm is well known for their paid internet security suite, but they have a free edition of their firewall for home use, which is worth a try if you do not like Comodo Pro for some reason, for example its jazzed up interface.

Download Zone Alarm free [take care to choose the firewall and not the Internet Security Suite, which is paid]

When using a computer, installed programs will mostly leave traces of your activity. While your immediate reaction may be to suggest using portable software, this is not practical for daily use in your own computer (portable apps are slower and have less features).

CCleaner is a free computer cleaner which can remove temporary files (some of which are created during browsing), unused files (including those from uninstalled applications) and unused registry entries. 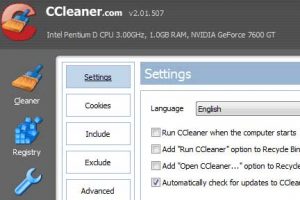 It can remove temporary and configuration files from Internet Explorer and Firefox, which can be invaluable. Furthermore, it can remove Recent Documents list, recent search history, Run history, Windows prefetch data and memory dumps (all of which can yield personal details or invade privacy).

When you store valuable documents with personal details, it is best to encrypt them for added protection. TrueCrypt is a free and open-source encryption software. Files, folders or entire partitions can be encrypted using TrueCrypt, with a good choice of encryption algorithm. 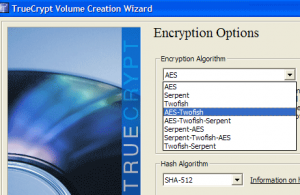 Internet Explorer is closely integrated into the Windows core, which increases the vulnerability of the operating system at large. The integration weakens the OS, because any security exploit targeted at the browser can also affect the OS.

Firefox is a secure, free web browser with a very large collection of themes and extensions that can improve the functionality of it.

Though Firefox is the obvious choice when choosing a browser in such circumstances, any other secure browser which is not integrated with Windows core can be used – Safari, Opera etc.

Note: Firefox, CCleaner and TrueCrypt are not actual security software, but they can reduce security exploits, and hence they have been included here.

By using these tools, you can reduce the risk of malicious attacks against your computer. Along with some simple wisdom (which will be covered here in a post later this week), I have reduced malicious attacks to such extent that I have had only one malware attack in the last two years.