It was a good Christmas eve for me, with one of my posts hitting the front page and getting 700+ diggs. This is an expression of my thoughts about the digg and related issues. This site is hosted on Dreamhost, which ’supposedly’ buckles under the pressure of a Digg and the site goes offline. I have more to say on this, read on.

The post was Top 40+ GIMP plugins, dugg here. It got 712 diggs, and received over 24,000 hits in a day. The traffic was in an unfamiliar pattern. Usually, a story gets picked on Digg, then on Stumble Upon and Del.icio.us.

However, in my case, SU was the first. Many of the incoming visitors dugg the story (I had a ‘Digg this’ link in the beginning and end of the post), and the story was up on the Digg Hot Topics section. From then on, the progress was slow untill 50 diggs (when it became popular), and then rocketed to 500+ diggs in less than 6 hours.

The reason for the Digg number was rightly pointed out in a comment by gary4gar:

Looking back at my stats, I see that the vast majority of hits have come from Digg. However, unusually, SU has given its fair share too. Del.icio.us disappointed me, to say the least.

I had thought of publishing the stat images and graphs, but unfortunately, they are fragmented in my Statcounter and Google Analytics accounts. Statcounter contains the total number of hits, but they offer limited stats. I am switching to Mint next month, anyway. These might make some sense when viewed together: 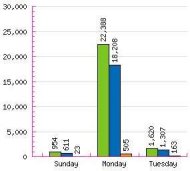 Over 60% of the traffic from social media sites was contributed by Digg (no surprises there), but surprisingly, over 30% was from Stumble Upon. I’m starting to love SU as much as Digg!

I had read that most Diggs would not bring any loyal traffic, and that it would be just a blitzkreig of visitors for a day. However, I find this disturbing, because I gained 95 subscribers on the day.

To make things easier, you might want to subscribe to my feed, if you haven’t done so already.

Dreamhost is often blamed as being a slow, unreliable host that goes down in case of a digg. However, I have also noticed that some blogs stay online during diggs. Analyzing my own digg, I can say two things:

The site did not go down at any point, and is a testimony to three things – the myth about Dreamhost, and the effectiveness of WP Super Cache plugin and my little optimization techniques.

I had deployed the Super Cache plugin with the lockdown setting enabled, which explains why your comments do not appear immediately. This reduced the CPU usage greatly. Usually, Dreamhost suspends accounts due to CPU usage, which did not happen to me.

The design of this site contains only a handful of images, thereby reducing both bandwidth usage, and more importantly, the number of HTTP requests. Reducing the HTTP requests is crucial, so I recommend that you use a theme with few images if you get dugg frequently.

A shout goes out to Tonnet, who submitted the post to Digg, SU, Del.icio.us and other countless social media sites. I would also like to thank my good friends Shankar and Mayank for their support during the digg.

I see many bloggers lambasting digg in many ways, claiming that the time, effort and resources consumed cannot justify the end result. I say that it depends on your end result. In my case, it was certainly worth it, and I might write more such resource posts.

However, seeing how many readers frustrated at such posts in blogs, I would like to ask you this question: do you like such long posts, or would you rather that I published them as pages (thereby removing them out of the post hierarchy and feed)?

Update: Lifehacker has linked to the GIMP plugins post! It has appeared on the Australian version of Lifehacker too.

Update #2: Feed subscription numbers have fallen rapidly, and as Benedict comments below, this might be caused by browsers which act as feed readers (who stomped this blog on the day of the Digg.

Update #3: I have written top ways for a Digg-worthy blog post, so check it out!